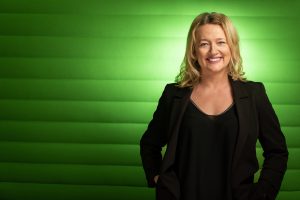 Nottingham Trams has been operating for 15 years and, with nearly 300 employees, it strives to provide a high standard of customer service across its remit, says Megan Gough, UK Head of Client Success at Reward Gateway. However, in order to achieve this, it had to start by ensuring employee engagement.

The Nottingham Trams HR team recently carried out an employee engagement survey that showed most of its employees felt disengaged from the business. With an employee demographic dominated by males between the ages of 40 and 60, and with 80 per cent working remotely, the HR team was finding the development of effective communications channels particularly challenging. Access to the company intranet was problematic and not helped by being spread between various providers. The HR team had to deal with increased administration as a result of the issues with the intranet, meanwhile employee engagement remained low.

In November 2016, Nottingham Trams sought to break down these communication barriers by building an Employee Mobile App. The team knew that for the app to have a tangible impact, it couldn’t be seen as a management gimmick. So, developing the right branding would prove critical to its success. 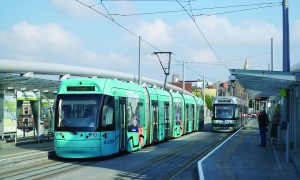 The Nottingham Trams team decided to introduce a mascot for the app which they called EmMA. EmMA was a pink and white robot, based on the image of a former employee who had been the go-to-person whenever someone had a problem or needed advice.

EmMA’s main aim was to make the new technology more user-friendly. The team made EmMA an integral member of Nottingham Trams, giving her the honorary title of Engagement and Communications Assistant, associating her with benefits, rewards and company communications and making her a key driver for the communication of the app itself. Elements such as “Report an Issue” were changed to “Ask EmMA” as a way of completing the personalisation.

Nottingham Trams also extended the EmMA brand to their Reward Gateway benefits offering. Under the name “EmMA’s Benefits” they offered discounts and salary sacrifice options enabling employees to reap real value from a central platform designed around a strong company brand. The use of artwork throughout the app, focusing on trams and key Nottingham landmarks, made it instantly recognisable to all employees.

To communicate EmMA’s Benefits, the team pursued a strategy which included stickers in payslips, desktop screensavers, posters, banners, drop-in sessions and the use of employees as advocates. This was rounded off with “EmMA’s Essential Guide” to explain how the app works. 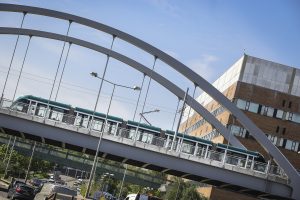 Aided by Reward Gateway’s single sign-on technology (SSO), the team saw 67 per cent of employees download the app and register for the EmMA’s Benefits hub within four weeks of its launch.

Companies of a similar size usually don’t see such levels of uptake for at least 12 months. Nottingham Trams’ employees also increased their take-up of Cycle to Work and childcare voucher applications, something which is being accredited to the fact that everything is now in one place and SSO has made signing on much easier.

Crucially, the company saw a significant improvement within its remote employee demographic. From its 139 tram drivers, 97 logged on during the first month, compared to only 19 using the old intranet at the same time the previous year. And over the following few months, that figure rose to 112 individuals (80 per cent) actively engaging with the offering.

The team is currently seeing over 80 per cent of employees logging on to EmMA every month and over 90 per cent of employees are now registered to use EmMA’s benefits. In addition, as of mid-2019, the team has seen a 68 per cent reduction in employees leaving the business. These results show that the effort around engagement, communications and development is paying off.

Nottingham Trams received their Investors in People accreditation thanks to its campaign to drive better employee engagement. However, the company is not resting on its laurels. It has continued to invest time and resource into the platform and launched EmMA 2.0 in June 2019. In the first two weeks following its launch, over 50 per cent of employees downloaded the new version. An EmMA brand refresh is also set for the near future. The app really has become integral to employees’ everyday lives and is genuinely making Nottingham Trams a better place to work.