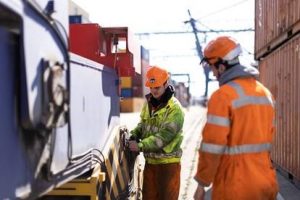 PD Ports is celebrating after achieving Gold status at the internationally-recognised RoSPA Awards for its ongoing commitment to demonstrating the highest health and safety standards across its operations.

The port operator, which is headquartered in the Tees Valley, owns and operates 12 key ports and logistics centres nationwide including Teesport, the fifth largest port in the UK, and Groveport, the UK’s hub for steel imports.

Awarded Gold status for the second time by the Royal Society for the Prevention of Accidents (RoSPA) for continuously driving its safety first culture and ensuring the safety of its people, its operations and anyone who comes into contact with the business, PD Ports’ HR Director, Russ McCallion, said the status is testament to the resilience of both PD Ports and its people following the most challenging of years.

‘It is no secret that Safety is our number one core value, instilled in to each person and operation across the whole of PD Ports,” said Russ.

“Following a year that presented us with many personal and professional challenges as a result of the COVID crisis, our people, as recognised key workers, have remained vigilant and resilient, allowing health and safety to inform every decision in order to ensure that everyone leaves work in the same condition in which they arrived.

“As we were all forced to come to terms with the ‘new normal’ and alternate ways of working, our people adapted very quickly to increased safeguarding measures meaning that we were able to minimise any potential risk of COVID19 in the workplace. We’ve also placed a renewed focus on mental health over the past 12 months in order to properly protect and safeguard all aspects of our people and their wellbeing.

“This award is testament to the efforts of all our people in caring for each other, respecting the values of our business and providing an unfaltering service throughout 2020.”

Julia Small, RoSPA’s achievements director, said, “The RoSPA Awards scheme is the longest-running of its kind in the UK, but it receives entries from organisations across the globe, making it one of the most sought-after achievement awards for health and safety worldwide.

“RoSPA is very proud of the achievements of its entrants, and with this award we recognise the best of the best, those organisations that have gone the extra mile, raising the bar for the delivery of safety in the workplace. Employees, wherever they may be should be able to go to work safe in the knowledge that they will return home unharmed and healthy at the end of every day. Our RoSPA Award winners are central to achieving this goal.”

PD Ports will be presented with its prestigious award at a virtual ceremony in September.