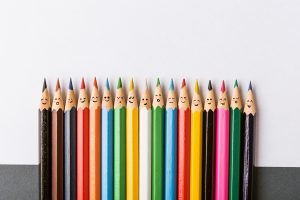 When asked to write this piece for SHD I must say I was slightly apprehensive. The conversation around racial discrimination can be hard to start, but is so important in order to educate yourself,  educate others and do everything you can to eliminate unconscious bias.

First, you must understand the difference between equality, diversity, and inclusion (EDI) in the workplace – they often get termed together with little understanding or respect for the differences.

Equality relates to opportunities provided to employees no matter what their differences and is quite often linked to being legally compliant. Diversity is where an employer actively seeks to recruit people that are different whether that be race, religion, gender, sexuality etc. The best definition I have seen for Inclusion is one that defines it as a state where all employees feel valued despite their differences and most importantly feels like they can add value too.

The UK is increasingly diverse, so it is important to recognise that organisations headed up by white males can no longer expect to be able to recruit people who are just like them. Organisations should recognise and embrace the multicultural world we live in within their recruitment strategies to work towards a culture of inclusion.  And this offers business benefits too.

Companies with the most ethnically diverse teams are reported to be 33% more profitable, and an inclusive business is naturally more creative and innovative. Did you know that being a diverse employer will also lead to better recruitment and retention rates? And that an inclusive culture at work helps empower employees?

The best leaders and organisations will recognise the many benefits of a culture of inclusion. They seek out differing opinions, they trust that a diversity of ideas and thoughts gives them a massive advantage and that this will only enhance the corporate vision, not damage it.

When we refer to race, this means being part of a group of people who are identified by their race, colour, nationality, citizenship, or ethnic or national origins. It is illegal to discriminate in any form against somebody due to their race. Yet despite this, half of employees have come across racism in the workplace and people of colour only represent about 8% of the FTSE100 director population. What’s more black and ethnic minority candidates send, on average, 16 job applications before receiving a positive response, where a white candidate would only need to send 9. And did you know that unemployment levels for BAME graduates are two and a half times higher than for white graduates?

Of course, the UK Government must play a role in responding to this issue and adapt current legislation in order to tackle inequalities in employment. Not only that, they need to look at the education system and understand any disadvantages faced before those from minorities even enter the world of work. However, it is also time for employers to take action to try to address this racial divide.

Tackling the issue with training

Talking about racism can be daunting to those who are uneducated on the topic, or fear saying the wrong thing so it is important to establish any training needs here. Providing your management team and employees with training around EDI and enhancing their understanding is vital if you wish to make that step change.

Employees must also understand they need to listen to each other. White employees should recognise that it is not solely the job of their ethnically diverse colleagues to talk about equality, diversity, and inclusion. This dialogue is important in order to raise awareness of any issues and build relationships between colleagues. Keeping a lid on systemic racial issues and leaving employees to internalise problems because they don’t feel they can talk about them could lead to huge reputational damage for an organisation.

It is also important to understand that race discrimination is not always deliberate. Someone may be discriminating against a person without even realising it or meaning to. This leads us on to unconscious bias.

Unconscious bias and racism have some very clear distinctions. Racism refers to an explicit belief that some races are superior/inferior to others, whereas unconscious bias is when social stereotypes about certain groups of people are formed by individuals outside their conscious awareness. While these biases are often incompatible with a person’s conscious values, both racism and unconscious bias can have negative effects within the workplace. So employees need to understand these biases in order to interrupt the norm.

Unconscious bias is particularly prevalent in recruitment or when teams form/merge as it often occurs as part of a first impression. Now of course this can go favourably too. For example, if an interviewer finds out the candidate supports the same sports team then anything negative from that point on could be overlooked.

Conversely, negative stereotypes can be formed based on a persons’ ethnicity, for example, or maybe an accent on a telephone interview leads to assumptions about that person. What if a recruiter receives a CV with a ‘different sounding’ name on it? Maybe they find it too difficult to pronounce or can’t automatically tell the applicant’s gender, and this makes them feel uncomfortable.

All of the above examples have nothing to do with a persons skills and attributes or their ability to do the role, so you need to create a culture within your organisation that challenges and discusses these biases. You may want to remove the chance of bias through things such as “blind” CV’s, where names and gender are not included.

It’s not enough to just talk about creating a culture of EDI. It is about organisations and business leaders holding themselves to account and taking action. They must review whether their claims that they are a diverse and inclusive employer on recruitment adverts is true and dig deeper to understand if the opportunities their ethnically diverse employees get are truly equal and remedy any disparities. It is about looking at your data and not only identifying what needs to be done, but doing it!

Where the problems are systemic it may require massive business disruptions in order to create a long lasting change. Even immediate action may take a long time to yield results. The Employers Networking for Equality and Inclusion (ENEI) themselves say that full inclusion is a temporary state that few organisations will ever achieve, so it must be understood that a drive for continuous improvement in this area is in the best interest of all involved.

There is a new narrative beginning to take shape. There is a spotlight on racism, and I for one am optimistic for the future if we all maintain our focus on this important issue.