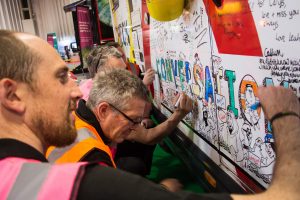 Improving the mental health and wellbeing of professional drivers is one of the most pressing, yet widely ignored, issues in Britain today, says Tom Footitt, Business Development Manager at How’s My Driving?

Since 1995, the team behind social enterprise How’s My Driving? has endeavoured to make the UK roads safer. The road safety sticker service independently gathers feedback given by other road users and helps businesses recognise patterns in driver behaviour via management information reports, alongside reducing claims, fuel costs and helping to drive down insurance premiums.

By placing the How’s My Driving? sticker on a vehicle, drivers are not only more accountable, but businesses are better able to identify issues and target training requirements. As well as managing irresponsible handling of vehicles, at the most extreme it allows for the identification of wellbeing issues.

One of our members had a string of out-of-character reports for a long-serving team member about aggressive driving behaviour on Monday mornings. Through an open and honest conversation with the driver, it was revealed his home life was significantly disrupted, particularly over weekends. However, he didn’t feel it was a problem he needed to discuss or one that affected his behaviour. Following action taken by the team to raise the issue with the driver and offer support, a potential incident was avoided and the driver was able to change his behaviour.

This type of situation demonstrates the value of having How’s My Driving? feedback. Without it, the driver was placing both himself and others at risk of an accident. The difference between a collision and a fatality is quite often down to chance. However, the data provided through How’s My Driving? can be used to ensure driver wellbeing and act as a proactive, preventative management tool.

According to mental health charity MIND, 30 per cent of self-certified illnesses experienced by employees in the logistics sector are mental health related. While 22 per cent of workers have been diagnosed with mental health issues, less than half have felt able to inform their employer. The logistics industry has long talked about needing to find a solution; now is the time to act.

In 2018, 6,507 people took their own life. This is an average of 18 people every single day. 75 per cent of these people were men. This is of growing concern in the logistics industry whereby the workforce is male dominated and often involves prolonged periods of isolated working.

The Battling Suicide Bus, supported by How’s My Driving?, was created to address the stigma surrounding mental health issues. Since July 2018, it has been on a UK-wide tour visiting towns, cities, service stations, universities and workplaces to raise awareness and prompt people to talk about mental health. Whilst the bus itself is not operated by mental health experts, it functions as a place to come and participate in a genuine conversation with a colleague, friend or stranger. 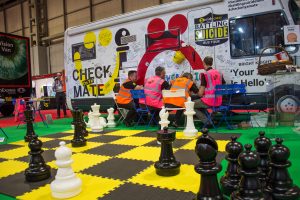 5asideCHESS takes less than four minutes to play and is played on a six by five chess board using half the pieces found in the traditional game. No prior knowledge of the rules is needed. Rather, the focus is on getting people away from the stresses of modern life and engaged in a chat. The staff at How’s My Driving? are very proud of the impact the bus and by extension, chess, continues to make and are keen to help other businesses that are prepared to implement long-lasting changes to make a genuine difference to their workforce.

As well as facilitating conversation, The Battling Suicide Bus is a canvas of messaging about people’s personal experiences with suicide. It has been signed by more than 400 people, all offering messages dedicated to those lost to suicide. This illustrates the devastating impact caused when someone takes their own life. One message on the bus simply states: “I wish we went for that pint, mate”.

“This is only the start of the conversation; the sector must respond and work together to deliver solutions,” says Tom. 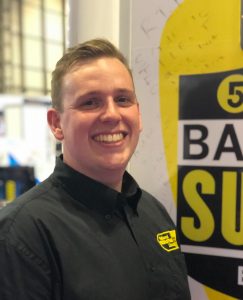 In future, the aim is to encourage businesses to take on the challenge of driving the bus themselves, visiting their own teams and communities. The bus and game of chess provide the tools to start positive action, which will continue when the bus is no longer there. However, with raising awareness comes the need for follow-up action to be taken. This is only the start of the conversation; the sector must respond and work together to deliver solutions.

If your business demonstrates a real and tangible commitment to connecting and promoting positive mental health in the workplace then why not get involved with the programme of activity to promote wellbeing at work? The wider benefits of membership include the funding of road safety projects, supported by the profits from membership fees each year.