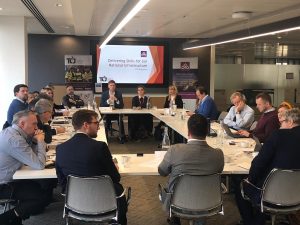 Talent in Logistics Journal, in partnership with Public Policy Projects, hosted a roundtable discussion to kick-start the 2020 Delivering Skills for our National Infrastructure policy programme.

The roundtable, co-chaired by former Secretary of State Rt Hon Stephen Dorrell of Public Policy Projects and Ben Howlett, its Managing Director, brought together senior representatives from the aviation, rail, highways and shipping sectors alongside private sector organisations, government, industry regulators and trade bodies. The programme of work, set out in the meeting, will see stakeholders from across the UK’s infrastructure sector come together to develop actionable insights to address the primary skills challenges facing the industry.

The government has promised a renewed focus on improving the nation’s skills base alongside its proposed “infrastructure revolution.” National, regional and local government is critical to securing the right skills, in the right area and for the right projects. In practice, this requires firstly identifying where the starkest skills shortages are and how recruitment, training and development can be improved to best meet these needs.

The infrastructure revolution includes HS2, Northern Powerhouse Rail, a Manchester to Leeds railway line, a Midlands Rail Hub and £29 billion for highways. In addition, the Government has also announced a £3 billion National Skills Fund to develop the right talent to meet the ambitious infrastructure targets it has set.

To improve national productivity, infrastructure must be improved. In reflection of this statement, Stephen Dorrell challenged attendees to establish how the UK can develop the skills required to deliver on the proposed infrastructure projects and, secondly, to assess what needs to be done to ensure the skills are in place to operate the infrastructure once it is developed.

Against this policy backdrop, the roundtable sought to establish the scale of the skills gap in the UK and what public and private sector bodies are currently doing to build and sustain workforces with the right skills. Of the key themes which emerged, an area where both public and private sector organisations found agreement that major improvements are required is in relation to the Apprenticeship Levy. 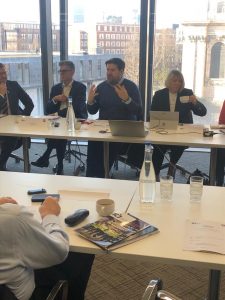 Opening the debate by reviewing the current issues with the Levy, John Cope, Deputy Director for Education at Public First, called on the group to debate the ‘real cost of training’. This is of crucial importance as training that is not cost-effective will cease to be offered by colleges. However, more fundamental frameworks surrounding decision making for how the Levy fund is spent needs to be established.

There are many calling for apprenticeships to be redefined in order to encourage uptake.  However, in the absence of a consensus around how this should happen, it is likely to create more confusion than it resolves.  For every industry stakeholder questioning whether degree apprenticeships are being misused and therefore should be excluded, for example, another views these as essential. However, the real challenge to redefine apprenticeships is far more fundamental. It stems from the lack of companies making effective use of the Levy, with many not using it at all.

One organisation that does make use of the full amount of their Levy is Network Rail. Richard Turner, Head of Apprenticeship Delivery at Network Rail, reported that they employ 800 apprentices every year across 40 different schemes. Affirming the vast contribution, they already make in areas including infrastructure maintenance and rail operations, explained Richard.

While Network Rail exists as a great example of an organisation making the Apprenticeship Levy work, not all large companies do. In the infrastructure sector, this could potentially be addressed by large scale operators such as Crossrail, Transport for London and HS2 putting a requirement for apprentices in the procurement contracts they offer out. Requirements for this could be established by the Strategic Apprenticeship Taskforce, which includes Department for Transport, HS2, Heathrow and Network Rail, to champion apprenticeships in the sector.

While there are examples of apprenticeships being used as effectively as a pathway into infrastructure careers, it is difficult for companies operating on a smaller scale to the likes of Network Rail to muster the resources required to employ even one apprentice. Mat Baine, Managing Director of Collaborative Project Management Services, a rail industry SME employing 45 people and one apprentice, raised his concerns with the time, and administrative and support costs of employing an apprentice.

For SMEs which often operate to tight margins and pressurised workforces, issues such as sourcing a training provider, ensuring they can offer the right workplace support to apprentices and even assessing whether the work they require is appropriate for an apprentice can arise. Currently, there is no collective group which provides SMEs with information and support in this area, which limits the extent to which they can offer apprenticeships. Should a group be formed, it could allow for collective pooling of information and resources allowing SMEs to increase their apprenticeship capacity without suffering a loss of productivity from other members of the team.

This is likely to be a barrier in the logistics sector where 85 per cent of businesses are SMEs, as Richard Burnett, Chief Executive of the Road Haulage Association, pointed out. Of these SMEs, many are working to a one or two per cent margin, highlighting just how stretched resources are and, thus, the barrier to hiring apprentices. Of course, this sector is not unique in this regard. For many businesses, they simply cannot afford to train people, Richard concluded.

Apprenticeships have massive value beyond the development they provide to individuals and the economic benefit they bring to businesses. As Karen Wallbridge, the Skills and Employment Lead for Diversity, Inclusion and Talent HR at Transport for London (TfL) pointed out, use of the Levy to encourage apprenticeships can unlock new opportunities to boost social mobility and encourage diversity. For TfL, she reflected, this is the ‘right’ solution for them and is about more than just spending the Levy.

To deliver tangible change within the Levy, the Government must focus on putting the support in place to allow apprenticeships to actually happen as opposed to fixating on fundamentally rethinking what apprenticeships ‘should be’. 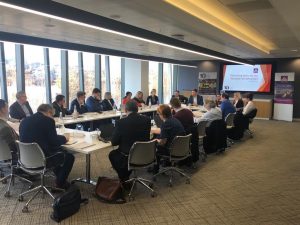 Developing a programme for change

Bringing it back to the mission at the heart of the programme of work, delivering change that improves the lives of citizens, Mike Hayward, Partner and Head of Road Transport, Crime and Regulatory at Woodfines Solicitors, called for the programme of work to ensure it consults with those working on the frontline of infrastructure service delivery, as well as training providers, education organisations and industry.

Over the course of 2020 and beyond, Talent in Logistics Journal and Public Policy Projects will expand upon the themes discussed at the inaugural roundtable, forming subject specific working groups to develop actionable insights which will be compiled into an annual white paper.