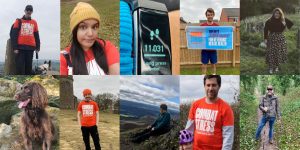 Pall-Ex Group has raised over £10,000 for Combat Stress, the veterans’ mental health charity, during its March in March challenge.

The team, made up of Pall-Ex Group staff and members, completed the annual challenge which tasks participants to march, run or walk a minimum of 10 miles during March.

Combat Stress is Pall-Ex’s charity partner and the money raised by the Group will support the charity in its life-saving work, supporting veterans with complex mental health problems including anxiety, depression and post-traumatic stress disorder.

Overall, the 19 team members raised over £5,000 during the month and the Group then matched this figure, taking the total to beyond £10,000.

The £5,000 contribution was made from the Pall-Ex Group Penny-a-Pallet fund, which is generated from a penny being donated for every pallet moved throughout the year.

The exceptional growth Pall-Ex Group has seen over the last 12 months, during the lockdown periods, has allowed the business to make even larger contributions to its chosen charity partners.

In addition to this, one member of the team, Nigel Mackenzie from Pall-Ex shareholder member Nissin (UK) Ltd, raised an incredible £2,015 himself, claiming third place in the fundraising leaderboard.

This is the second time Pall-Ex Group has taken part in March in March, having raised a few hundred pounds for Combat Stress in 2020.

This year, both of the Group’s pallet networks, Pall-Ex and Fortec, celebrate their 25th anniversaries, with supporting charities at the heart of this year’s objectives.

Pall-Ex Group’s CEO, Kevin Buchanan reflects on the team’s achievement and why the Group is proud to support Combat Stress.

He comments: “I am really pleased that the Pall-Ex Group team has been able to support Combat Stress again this year in its March in March challenge.

“As we celebrate our 25th Anniversary, we want to be able to do something special for our chosen charitable partners, so we felt matching the incredible total raised by the team was a great way to do this.”

The initial fundraising target set by Combat Stress for its March in March challenge was £40,000, which would have enabled the charity to deliver one to one psychiatric sessions to 200 veterans to help them on their way to recovery.

However, with over 800 fundraisers from around the UK taking part in the challenge, this target was quickly surpassed.

As of Wednesday 31st March, the challenge has raised a fantastic £122,995 which will allow specialist help to be provided to over 600 veterans.

Maggie Bennion, Senior Corporate Fundraising Officer at Combat Stress describes how important the contribution from companies like Pall-Ex Group is to the work they carry out.

“The last year has been challenging for so many charities due to the pandemic, so to see such fantastic engagement with March in March and to raise over £120,000 is incredible. It will help us to continue delivering life-changing treatment and support to veterans across the UK.

“Thank you to Pall-Ex Group and everyone who took part in March in March – without your support, we simply couldn’t do what we do!”

Although March in March has ended for this year, there are still plenty of opportunities to support Combat Stress.

View a full list of fundraising challenges by visiting: combatstress.org.uk/support-us/get-involved