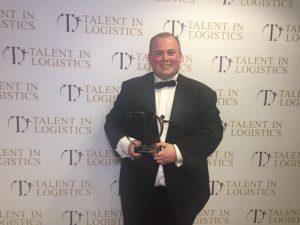 LGV Drivers are the face of our sector. Their actions shape the image and reputation of their employer and the sector as a whole. It’s a demanding role with long hours, and it’s almost all conducted in the public eye. But without them, how would we as a sector transport goods from A to B? Earlier this year, Alex Hudson of JJX Logistics was crowned LGV Driver of the Year at the Talent in Logistics Awards 2019. Today, he joins us to discuss his achievements, why he became an LGV Driver and why he believes others should consider this role as a career option.

During the Talent in Logistics Live Competition on 27 June, Alex faced a number of challenges where he demonstrated high level of skill and safety through demonstration of both underpinning knowledge and practical operation.

Having worked with JJX Logistics since he was 18, Alex has gained sufficient knowledge to understand the supply chain, as well as learning the ropes to be a first-class driver.

Thanks for joining us today Alex. How did it feel to be crowned LGV Driver of the Year 2019?

“It felt and still feels amazing to have been crowned LGV Driver of the Year 2019. When I arrived at the finals, I saw the other finalists and I thought that I was going to be up against some of the country’s best drivers in the business, it was too close to call if I had done everything right to be even in the running for the award. However, on the night of the awards we were kept in suspense as this category was the last to be called on the night. When my name was called out as winner I thought no this can’t be right, it’s a mistake, and I looked up at the big screen and saw my name up there. It was such a great feeling to have won against an experienced bunch of people.”

Since being crowned champion, how has winning impacted on your everyday role?

“When I visit our customers they all congratulate me on my achievement. The day after winning the award I arrived at one of our customers premises and they had all heard about my win, even the managing director personally came out and congratulated me. We as a company do a lot of distribution centre deliveries and I have been talking to drivers there who have also commented on my win, due to them seeing it on social media. It’s a great feeling to be recognised for the achievement because it’s not just a local award, it’s national.”

Do you mind telling us how you got your role at JJX Logistics? What made you want to become an LGV Driver?

“I first started working for JJX when I was 18 as office admin, where my role included dealing with phone calls from customers, booking jobs on to our system and planning runs for our drivers. As I was still at a young age to be able to drive goods vehicles, this was a great way to get my foot in the door of the sector. I then worked my way up to becoming a UK delivery driver, I was then given opportunity to venture out into delivering aviation parts across mainland Europe. My life ambition has always been to drive LGVs. I have been brought up in the sector with my grandfather being a lorry driver, spending many school holidays with him on the road.

“Our managing director, John Donovan approached me one day and asked if I would like to train for my HGV licence, which I quickly accepted. I was put in for my HGV class 2 at our local training provider GTG Training, where they gave me 1-1 training and within a week I had passed. Over three months I had also passed my HGV Class 1. I was over the moon that I had finally been given the chance to live my life dream, and I was given my first truck and I have never looked back since I now drive all over the UK, Ireland and Europe delivering a wide range of goods. I am eternally grateful to John and the team at JJX for the chance to better myself and do something that I really wanted to do.” 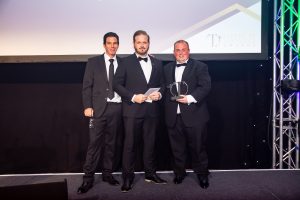 What an inspirational story Alex, and what an achievement it is to have gained such a great deal of experience in such a short amount of time. What are the next steps for you and your career?

“I think even though I am still at the young age of 27, I am living the dream as they say, I would like to broaden my horizons within JJX and explore new opportunities. I already have my vehicle mounted lift truck certification to carry on trailers to unload ourselves when delivering to customer premises. If the opportunity would come up to do more specialised transport then I would soon be putting my name down for that as I love a challenge.”

Why would you encourage others to consider the role of an LGV Driver?

“There is a lack of publicity for the logistics sector, not many people are keen on the hours we do and the types of jobs that we may have to do. Unfortunately, the average age of people working in the sector to date is between 45-60, with a lack of the younger generation. I personally think that there should be an option in schools and colleges to enter a logistics path, as there are so many benefits to becoming an LGV driver.

“The younger audience may have thought about this as a career path, but as there isn’t really enough information out there, they have explored other fields leading them to not necessarily enjoy it or leaving it as a second choice. I have always been grateful for the support from my family, it can be tough working away with long hours. As long as you have the support from the offset, this is a massive help in furthering your career in the sector.”

Commenting on Alex’s achievements during the evening of the Talent in Logistics Awards, John Donovan Managing Director from JJX Logistics, said: “Alex started with JJX Logistics back in November 2011 as a very shy office apprentice. Alex was young and enthusiastic and I felt I had to give him a chance, and of course he didn’t let me down. He worked all the hours possible, he came in weekends and stayed over just to help out. After driving vans for 3 – 4 years we put him through his class 1 and 2 which he passed with flying colours and I kept my promise to Alex that I would get him his own truck, which Alex has made his own. He loves that truck!

“I’m so very proud of Alex for what he has achieved and I’m a great believer that sometimes you just have to take a chance.”

If you believe that you are the next LGV Driver of the Year, then it’s time to enter the Talent in Logistics Awards 2020. Entry dates for the 2020 Awards will be announced in the upcoming months. Find out more about the category here.