There is a lack of awareness of the career opportunities on offer. The sector lacks diversity, especially gender diversity. This did not deter Emily Clark however, who was thrilled to be offered an apprenticeship with PD Ports.

It was at Tees Valley Logistics Academy, Stockton Riverside College, where Emily was studying for her A Levels, that she was introduced to the four week internship in the engineering department at PD Ports. “After the four weeks, I really didn’t want to leave,” recalled Emily. She didn’t have to leave either, because she was offered a six-year civil engineering apprenticeship with the company.

“It’s the sort of opportunity you don’t expect to get, and it gives me a chance to create a career here.” 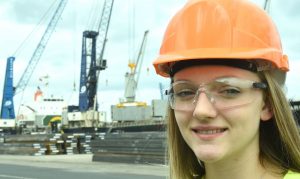 Over the course of 18 months, the apprentices work with an industry mentor, experience workplace visits and receive a four-week paid internship with a local employer. The academy was set up to tackle the skills shortage within the logistics sector and to make sure students are career-ready. Logistics, after all, is an integral part of the lifeblood that makes up the industry in the Tees Valley.

In the past, many students have viewed apprenticeships as second rate to a university degree. Indeed, this view has been pushed upon some young people by their parents and even schools whereby university is viewed as the only route to a “decent” career. Jim French, Director at Portcentric Logistics, strongly refutes this belief, saying that: “We want to dispel some of the myths that prevent young people looking to logistics as a career and show them there are no barriers to progression, provided they bring a positive attitude and a commitment to learning.” 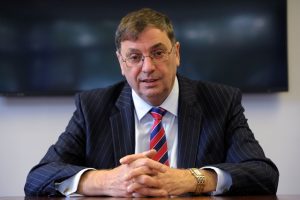 Employers such as PD Ports gain just as much from apprenticeship programmes as the graduates themselves, and Neil Dalus, Group Engineering Manager (Civil), at PD Ports believes: “The Logistics Academy is a two-way thing in that it can help employers retain the best talent in Teesside while giving young people like Emily exciting career opportunities.”

Logistics businesses, which employ over 2.5 million people, desperately need to recruit more employees with the right skillsets to meet the challenges industry presents. However, unless the training pathways are available, and people know about them, neither supply nor demand will be properly met.

Sally Gilson, Head of Skills at the Freight Transport Association (FTA), is calling for employers to do more to use the funds made available through the Apprenticeship Levy. However, for such funding to be used effectively, the FTA believes suitable standards are needed to provide a benchmark for training recruits. Also, rather worryingly, only nine per cent of funds gathered from the levy are used by employers across all sectors.

Vocational education on the Government agenda

Changing the perception of more vocational skills pathways is not the sole responsibly of industry, and must be supported by the public sector, starting at the top. A recent survey commissioned by the Chartered Management Institute (CMI) found just over half of parents would now encourage their child to pursue an apprenticeship rather than apply for a degree course.

This is a promising turnaround for sectors such as logistics, which heavily relies on new talent. From 2020, a new T-Level qualification is expected to be made available to students seeking a technical qualification while at secondary school. Like the name suggests, the T-Level will be a technical qualification equivalent to the A-Level. The CMI survey found most parents knew very little about these new qualifications. Only 29 per cent of those surveyed had any knowledge of them, although this was an improvement on the 23 per cent who had heard of them when surveyed last year. Commenting, the CMI’s Rob Wall said the figures present “a real challenge” but “educating and informing parents will be key to making T-levels a success”. 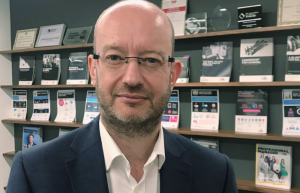 Along with its career-ready programme for 16-to-18-year-olds, The Tees Valley Logistics Academy also runs a programme for unemployed people aged 19 and over and is now working with secondary schools to introduce logistics to those aged 14 to 16. Technical expertise, as well as vocational training, is crucial for ensuring logistics needs are met and to ensure vacancies are filled by people with the right skills. The Department for Education is expected to launch a nationwide campaign to raise awareness of T-Levels among pupils, parents and employers soon and this can only help address the shortfall in the logistics talent pipeline and help attract more students like Emily Clark to pursue a career in the industry.